Undaunted by the seasonal threat of typhoons in the area, the special Opening Ceremony here in Akita Prefecture in north west Japan brought a great sense of tradition to the event. As part of the programme of the International University Sports Federation (FISU), the scene is now set for the World University Waterski Championships, culminating in Saturday and Sunday’s battle for Finals honours in Waterski Slalom, Tricks and Jump.
In welcoming all, Mr Byon Jin YOU, FISU Executive Committee member, highlighted the need in these troubled times to uphold basic human values, build teamwork and promote fairness, all of which are contained in the Charter of the United Nations and where sport plays such a special role.
Against the background of traditional Ocarina pipe music and drums loud enough to wake the dead, the giant Namahage festival creature of the nearby Oga area is thought to bring great harvests, good health and luck to the villagers. No doubt the athletes also hoped that they too will get some help from the Namahage at these Championships as he paid them a visit tonight!
The final list of countries represented at these World University Waterski Championships includes Australia, Austria, Canada, Czech Republic, Dominican Republic, France, Germany, Great Britain, Italy, Japan, Republic of Korea, Lebanon, Mexico, New Zealand, Norway, Sweden, Switzerland, Slovakia and USA. 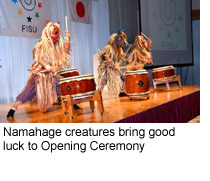 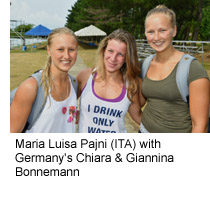 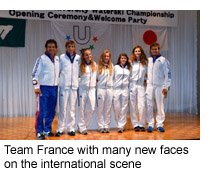 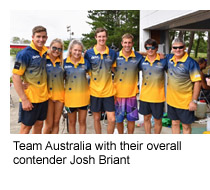 With the Ceremonies now over, Thursdays programme will see the first Preliminary Series of Men’s Slalom and Men’s and Women’s Tricks kicking off. In Slalom, all eyes will again be on the hot favourites Matteo Luzzeri (ITA), Benjamin Stadlbaur (SUI) and Dane Mechler (USA). If they succeed in getting high scores on the short 10.75m line, Saturday’s Finals will certainly be special. In Tricks, Martin Kolman (CZE) and Joshua Briant (AUS) must be certain Finalists unless the weather upsets the predictions. For the Women, it will be a much closer battle to get through the Thursday’s Tricks qualifiers. If Giannnina Bonnemann (GER) is on form, she should be a certainty to move to Saturday’s Finals with the talented Carolina Chapoy (MEX) and Maria Luisa Pajni (ITA) close on her heels. The Jump programme does not start till Friday with Sunday Finals.
The technical support team of Nautique boats has arrived from the USA to ensure all runs smoothly. Thursday could be wet here in Akita but the later weekend looks much more promising as we appear to have missed the Typhoons in the region.
These 2016 World University Waterski Championships are sanctioned by FISU (Federation Internationale du Sport Universitaire, JUSB (Japan University Sports Board), IWWF (International Waterski & Wakeboard Federation), JWSA (Japan Water Ski Association and JCWF Japan Collegiate Waterski Federation.