Waterski seniors turn out in force for over 35s World Championships in Sesena, Spain as legends take gold medals and break world records

Past World Record holders and past World Champions returned to capture headlines and glory over this past week in the world of Waterskiing. Many performances were quite extraordinary. At last count, eleven new pending world records were set!
The attraction of high level sports events for Seniors has never been so strong. Legends in golf, tennis, waterskiing and others, are all enjoying their return to the limelight. The Senior PGA Championship founded in 1937 hasalready seen golfers Arnold Palmer, Gary Player, Tom Watson and others on the podium. In tennis, the ITF Seniors and Super-Seniors continue to grow in popularity. Waterskiing’s Over 35 World Championships at the weekend attracted 189 top athletes from 28 countries. The USA team alone had 63 contenders! Again, these Championships are going from strength to strength.
The location was Sesena in the province of Toledo, Spain, just 35km south of Madrid. The venue was the Botas Sesena Waterski and Wakeboard Complex, using two of its excellent man-made lakes. In all, there were four age categories for both men and women in Slalom, Tricks and Jump, with Overall titles also at stake. As the official supplier of the International Waterski & Wakeboard Federation (IWWF), the competition boats and service were provided by Nautique who also supplied the boats for last week’s FISU World University Waterski Championships in Akita, Japan. The Nautique 200 TE PCM 6.2L was equipped with the latest version of the Zero Off speed control system. 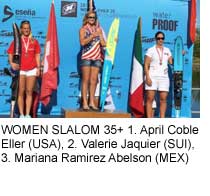 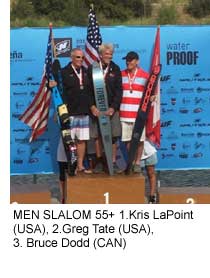 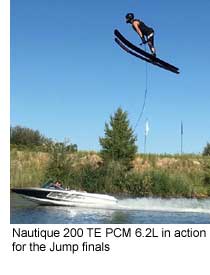 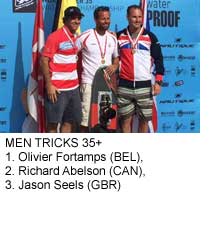 In sunny 76F / 25C conditions, some of those catching great attention on the water were international Waterski legends of the past, Kris LaPoint (USA), Jennifer Leachman (USA), Olivier Fortamps (BEL), Pierre Plouffe (CAN) and April Coble Eller (USA).
Kris LaPoint, in the Over 55s category, set Slalom World Records back in 1982 and 1984 and took the title of World Slalom Champion in 1975. His score here in Sesena was 5.5 buoys on the 10.75m line to beat four others on this same shortening for the gold medal. Jennifer Leachman, now Mrs LaPoint, set a total of three World Slalom Records in 1985, 1987 and nine years later in 1996. That final Record was 3 buoys on the 10.75m line. Her Sesena score of 2.5 buoys on the 13m line was not quite enough to reach the podium this time and the gold medal went to Lori Krueger (USA). Olivier Fortamps was truly in a league of his own here in Sesena. As a past IWWF World Cup Series star from 2006 to 2010, his Tricks score of 10,300 points would have been an Open World Record back in 1985 and was just 1,100 short of his all-time personal best! Pierre Plouffe, competing in the Over 65 category, has won over 30 Canadian Championships in the past and several World Championships titles in Overall. In the extreme sport of Waterski Jump, his superb distance of 34.7m in Sesena earned him yet another well-deserved gold medal, which he also took in Tricks and Overall. Finally, in the Over 35 group, April Coble Eller, a 24-time National Champion and a past US Coach of the Year with enough major Slalom medals to fill the Lake, took the Slalom title again with a score of 1.5 buoys on the 11.25m line.
The Team winners were:
1.      USA
2.      FRANCE
3.      CANADA
In presenting the Over 55 Slalom Gold Medal to Kris LaPoint, David Skillen (AUS), a candidate for the position of IWWF President next year, stated that this was a moment he will never forget. This must be the key to why so many real sports fans enjoy the thrill of seeing past legends returning to the limelight once again.