For many of the highest ranked Wakeboard Riders in the World, China’s magnificent Linyi City waterfront stadium is now a familiar venue. Exactly five years ago, the City constructed this architectural masterpiece specifically to stage what was then the 32nd Stop of the World Cup Series of the International Waterski & Wakeboard Federation (IWWF). This return visit to Linyi will celebrate the 46th Stop of the series – the longest running and most successful of the IWWF.
Combining the YiHe Open with the World Cup will guarantee a packed riverside Grandstand. Taking part this year will be Wakeboard stars from Australia, Canada, China, France, Great Britain, Ireland, Italy, Japan, Republic of Korea, Netherlands and USA. As for all World Cup Stops, an edited TV highlights show will be distributed globally via IMG, the global leader in sports, events and media which operates in over 30 countries representing many of today’s most successful Golf and Tennis players.
Watch out for details of the edited World Cup TV show later on our Website and Facebook Pages below, plus reports and photos. Measured by TV Airtime achieved, individual World Cup Stops have secured up to 1,200 hours via global distribution. On your next flight, your Airline may even include details of World Cup action for all to enjoy! 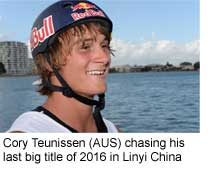 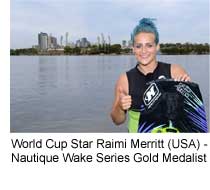 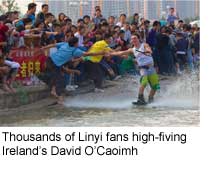 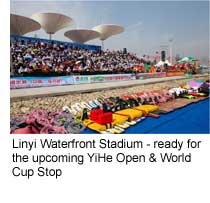 The timing of this final World Cup Stop of 2016 could not be better. The line-up of international Riders heading for Linyi is impressive. Australia’s Cory Teunissen has had a sensational year so far.  Having won the Mandurah World Cup Stop in Western Australia last season, he took the entire Nautique Wake Series 2016 title in Toronto in August – throwing in a Switch Nose Grab Heelside 900 to prove the point! World Cup super-star Raimi Merritt (USA), rarely off the podium, also took the women’s 2016 Nautique Wake Series gold medal. Both Teunissen and Merritt will now aim to take this World Cup title in Linyi. Watch closely also for male Riders Massi Piffaretti (ITA), Ireland’s David O’Caoimh and young Giorgia Gregorio (ITA) in the women’s event. Piffaretti is the reigning IWWF World Wakeboard Champion and took the Super Final title last month at the Europe Africa Championships. O’Caoimh has also had a sensational year. He took the gold medal at the Europe Africa Wakeboard Championships in August, plus for the third time, Germany’s top award at Chill & Ride. Gregorio, at just 19 years of age, took the Women’s gold medal at the Europe Africa Championships last month plus silver in the Nautique Wake Series in Toronto. All in all, Linyi is set for some great competition.
Over the past decade, supported by China Water Sports Administration and the Chinese Water Ski Association, China has been a dedicated supporter of the IWWF’s World Cup Series hosting events in the cities of Changshu, Beijing, Shanghai, Linyi, Liuzhou, and at the Olympic Games site in Shunyi.

Details of the edited World Cup TV show will appear on the websites and on Facebook as highlighted below.