With Wakeboard athletes from sixteen countries competing at this last World Cup Stop of the year, combined with the YiHe Open Championships, the standard of both the men’s and women’s performances has never been higher. As the final results emerged, it was consistency and experience which eventually made the difference.
Overall, two significant pictures emerged from this event of the International Waterski & Wakeboard Federation (IWWF) – the arrival on the big stage of an extraordinary group of new young talent and the sheer quality of the top Riders’ performances, both male and female.
Throughout the qualifying rounds, a group of Riders aged just nineteen or younger made their mark. These included Alice Virag (ITA), Giorgia Gregorio (ITA), Hee-Hyun Yun (KOR), Chloe Mills (AUS), Taylor McCullough (USA), Tony Iacconi (AUS), Cory Teunissen (AUS) and Nic Rapa (AUS). All of these young Riders were still in the hunt for medals as we reached the Semi Finals.
Defending World Cup Linyi champion Charlotte Bryant (GBR) was unlucky as a heavy fall spoiled her chances of progressing further despite her brave efforts. David O’Caoimh (IRL) also just missed a Finals place, being narrowly outpointed by IWWF World Wakeboard Champion Massi Piffaretti (ITA). Amber Wing (AUS) stunned all by her quick return to top form following the recent birth of her son with Dean Smith (AUS) another very experienced Rider who impressed all week. Both made it to the Finals. 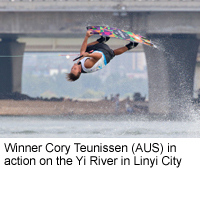 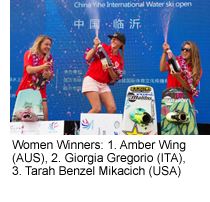 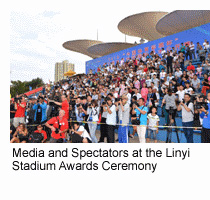 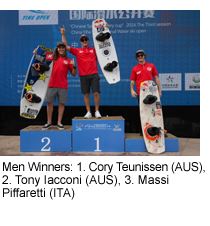 Following another wonderful Linyi display of Show Skiing and Aerial Acrobatics in the impressive Yi River Stadium, the Finals followed the pattern of the Preliminaries – new young talent versus the more experienced. In the Women’s event, with six Finalists, Tarah Benzel Mikacich (USA), a very impressive newcomer to the World Cup Series, took the lead following the efforts of youngsters Chloe Mills and Alice Virag.
Her solid  performances earlier were not enough to get Hee-Hyun Yun to the Podium and so a medal of some colour was now guaranteed for Tarah Benzel Mikacich. This left the challenge for the World Cup title to nineteen-year-old Giorgia Gregorio and the more experienced Amber Wing. Gregorio recently won the Europe Africa Wakeboard title. Wing won the Linyi World Cup title here in 2013. Coming second last off the dock, Amber Wing showed that time out for a pregnancy has only made her better. Her score of 61.67 was the highest of the day. Under enormous pressure for a young Rider, Giorgia Gregorio had to respond. In spite of a hard fall and an ankle injury, she somehow still got within two points of the leader to take second place. Amber Wing took Gold and Bronze went to Tarah Benzel Mikacich.
The six Men’s Finalists included three Australian Riders, Dean Smith, Tony Iacconi and Cory Teunissen. Tony Iacconi quickly took the lead from Dean Smith with an enormous score of 81.22. Italy’s Massi Piffaretti got very close to this with 80.22. This now left the door open for Mike Dowdy (USA) who was very impressive all week, Shota Tezuka (JPN) who was second here in Linyi a year ago and Cory Teunissen who won the 2015 Mandurah World Cup title. US Masters Wakeboard Champion Dowdy struggled however with the sometimes challenging water conditions. He knew he was out of the running as he handed over to Tezuka but the Japanese’s score of 79.89 was not enough to get ahead of leaders Iacconi and Piffaretti. Now it was all down to Cory Teunissen. He had given a master-class all week on how to just nudge up each performance to keep on top. In the Finals, he kept it all to the end and to the ovation of the spectators and riders, put in the performance of the Finals with a score of 89.78 to take the title. Tony Iacconi took second place ahead of Massi Piffaretti.
As confirmed by the Mayor of Linyi, Mrs Zang Shuping, the City is rapidly building a reputation as a major Sports City. The excellent Yi River facilities, the Linyi Yi River Stadium, the outstanding Opening and Closing Ceremonies and excellent general management of this World Cup / YiHe Open event, certainly confirm these ambitions. Supported by China Water Sports Administration, the Secretary General of the Chinese Water Ski Association, Mr Yao Xinpei, and his team, are also working on further ambitious developments of the sport in the years ahead.

Details of the edited World Cup TV show will appear on the websites and on Facebook as highlighted below.