An unpredictable week in Akita, Japan produced one of the most thrilling Waterski events of the year in the FISU World University Waterski Championships. The anticipated Typhoons never arrived, the mid-week dark clouds were transformed into hot sunny blue skies for the Finals and the most likely winners in most events just did not materialise. Each Finals in Slalom, Tricks and Jump thrilled the spectators as the outcome was always in doubt right to the very end!
Held every four years, these World University Waterski Championships are part of a series of events organised by the International University Sports Federation (FISU) containing a total of 33 different sports. The first class Waterski site at Ogata Village in Akita, Japan, is one of the best in the world. Nautique, the official boat provider of the International Waterski & Wakeboard Federation (IWWF), also supplied their boats and full technical support.
Men’s Slalom produced big surprises. Studying for his Doctorate in Sports Psychology, hot favourite Matteo Luzzeri (ITA) failed to make it to the Finals. In opening up the medals challenge, this produced a thrilling battle for gold between overall contender Martin Kolman (CZE), Dane Mechler (USA) and 19 year-old Junior World Champion Robert Pigozzi (DOM). While Kolman led the field till the closing moment, Pigozzi and Mechler took over in a head wind and tied with 2.5 buoys on the 10.75m line (39 Off). In a thrilling run-off, victory went to Dane Mechler, silver to Robert Pigozzi and bronze to Martin Kolman.
The Ladies Slalom event was more predictable. Having lost strong contender Maria Luisa Pajni (ITA) in the Prelims, Jenna Morgan (USA) and an injured Anna Cespivova (CZE) set the early Finals scene with 3 buoys on the 12m line (35 Off). Later, Camille Poulain-Ferarios (FRA) pushed the lead to 5 buoys on this same line. However, the nutrition student from Paris, Ambre Franc, really was in a league of her own, taking the gold medal with ease with 1 buoy on the shorter 11.25m line (38 Off). The silver went to Camille Poulain-Ferarios and bronze to Anna Cespivova. 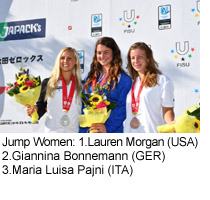 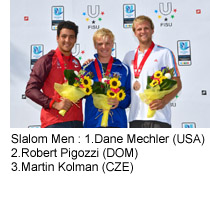 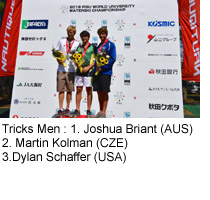 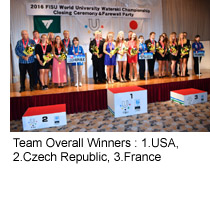 Tricks came next. The outstanding Prelims score in the Men’s event was 11,290 points by Joshua Briant (AUS). The top four Finals contenders all produced scores of over 8,000 points. For full-time students, this is exceptional. Fourth last off the dock, Dylan Schaffer (USA), holder of the USA Collegiate National Trick Record, set the final test at 8,460 points. Rodrigo Chapoy (MEX) got close with 8,070. Then the top two Overall contenders, Martin Kolman (CZE) and Joshua Briant (AUS) entered the arena. Kolman was ahead after Slalom and Briant desperately needed victory here to regain his Overall position. As it turned out, Briant’s extraordinary score of 11,740 was only 90 points short of his personal best and 230 points beyond Kolman’s personal best. It was a gold day for Briant, silver for Kolman and bronze for Schaffer.
As with the men, Ladies Tricks contenders fell into two groups, those who could exceed 5,000 points and those who could not.  Giannina Bonnemann (GER) knew that this was her event and her chance to nail down the Overall title. With 5,070 points, Carolina Chapoy (MEX), disappointed in Slalom, took the lead in the closing stages with 5,070 points. With a Slalom silver medal already captured, Camille Poulain-Ferarios (FRA), raised the bar to 5,870 points. Having already thrilled all with her Prelims score of 8,880 points, Giannina Bonnemann (GER) easily took the gold medal here with 7,500. Silver went to Poulain-Ferarios and bronze to Chapoy.
With hot sunshine and blue skies, conditions were excellent for the Jump Finals. The dreaded tail wind had disappeared. The top six Ladies in the Prelims were also the top six in the Finals – all scoring over 40.0m. Boat driver Campbell McCracken (NZL) congratulated Illana Bischofberger (FRA) on her new personal best score of 38.9m just before Maria Luisa Pajni (ITA) raised the bar to 42.7m. Taryn Grant (CAN) had a major crash but recorded a distance of 41.0m. With confidence high following her Tricks victory, Gianna Bonnemann (GER) then took the lead with 45.5m. Only World Cup star Lauren Morgan (USA) could take on this challenge. As the defending FISU Jump Champion, on her very first jump her distance of 46.6m brought an ovation from the crowded banks of Ogata Village lake plus a gold medal. Silver went to Bonnemann and bronze to Pajni.
Now it was time for the Men’s Jump Finals. All 12 contestants broke the 50.0m barrier. It was also the climax of the Men’s Overall challenge. The first big shock came with Marek Mlynek (SVK) – just second off the dock and scoring a big distance of 56.3m. Only one jump in the Prelims was longer than that!  In his Overall battle, Joshua Briant (AUS) then pushed the lead to 56.9m. This opened the door to the gold medal plus the Overall title for Martin Kolman (CZE). He need to exceed something over 57m to win both. To the roar of the crowd, on his very last jump, he landed a distance of 59.5m. to take both titles. Briant took silver and Mlynek took bronze.
What a perfect way to complete an outstanding FISU 2016 World University Waterski Championships.
Later the Individual Overall medals were presented to Martin Kolman (CZE) and Giannina Bonnemann (GER). The Team Overall Awards went to 1. USA, 2. Czech Republic and 3. France.
These 2016 World University Waterski Championships are sanctioned by FISU (Federation Internationale du Sport Universitaire), JUSB (Japan University Sports Board), IWWF (International Waterski & Wakeboard Federation), JWSA (Japan Water Ski Association) and JCWF (Japan Collegiate Waterski Federation). Thanks were also given to FISU Executive Committee Member, Byong Jin You and Hiroto Takahashi, Mayor of Ogata Village, for their support.