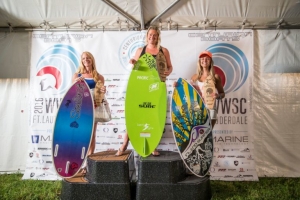 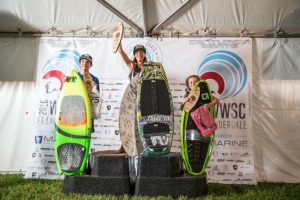 Fort Lauderdale, FL (September 28, 2016) – The 2016 Centurion World WakeSurfing Championships presented by GM Marine Engine Technology at Mills Pond was filled with amazing moments on the water for the final day of competition. Seventeen new World champions were crowned and an amazing 31 personal bests were pulled behind the Centurion Ri237.

On the Surf side of the Masters disciplines, the Women’s podium top spot went to Nicole Hudson (CAN), second place to Dawn Hooks (USA), and third to Susan Halford (CAN). Chris Bank (USA) dominated the Men’s Final followed by Matt Smith (USA) and Brent Dorey (USA).

After a substantial weather delay, the Junior’s division took the water for their Final round. This is the first year Junior’s have been included in World Wake Championships as their own division claiming her first title, Christtany Harler (USA) edged out Savanna Nordgren (USA) in second, and Mats Anderson (CAN) in third.

Crowds lined the shores in anticipation as the Pros headed out to the Roswell start dock. The PCM, GM Marine powered Centurion Ri237 wake rocked Mills Pond during the Pro events. In Women’s Pro Skim Final, Centurion athlete Taylor Dorey (USA) lived up to the hype built up from her exceptional performances in the previous rounds, scoring 101.0 points. Jodi Grassman (USA) finished second scoring 95.6 points followed by Centurion athlete Caro Villeneuve (CAN) in third with a score of 92.3.

Closing out the competition, Men’s Pro Surf put on a dramatic Final round despite the quickly darkening skies. Noah Flegel scored 102.2 points to take the title followed by Supreme rider Aaron Witherell’s 100.2 point score, and Centurion athlete Keenan Flegel scoring 94.9 points to round out the podium.

Wrapping up the weekend was Centurion athlete and adaptive wake surfer Grant Korgan rode in a demo exhibition behind the all-new Ri257. Followed by the 2016 WWSC Award ceremony Where Rick Lee was awarded with the Life Time Achievement Award.

About GM Marine: General Motors Co. (NYSE:GM, TSX: GMM) and its partners produce vehicles in 30 countries, and the company has leadership positions in the world’s largest and fastest-growing automotive markets. GM, its subsidiaries and joint venture entities sell vehicles under the Chevrolet, Cadillac, Baojun, Buick, GMC, Holden, Jiefang, Opel, Vauxhall and Wuling brands. More information on the company and its subsidiaries, including OnStar, a global leader in vehicle safety, security and information services, can be found at http://www.gm.com.