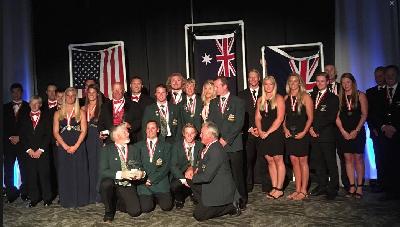 The 2016 World Barefoot Waterski Championships are over after an incredible day of competition that had perennial champions and young guns facing off on the water of the Blue Moo.

New Zealand’s Georgia Groen captured the Womens Overall title for the first time from Australia’s Ashleigh Stebbeings. Stebbeings won Slalom, Groen won Tricks. But the overall title all came down to jump with Stebbeings needing to land a record-breaking 22 meter jump to win it all. She landed a 21.9 meter jump to set a world record but it was just short of getting the points necessary to win overall. Stebbeings walks away from the championships with the jump world record and a pending slalom world record. Her performance helped lead Australia to the top of the open team competition.

The mens competition was just as exciting as David Small of Great Britain won the overall title for the sixth time in a row. Keith St. Onge of the USA won slalom and Small won Tricks with yet another pending world record. St. Onge also set a pending tricks world record with his second place finish. The surprise of the night was 13-year-old Jackson Gerard of the USA, Junior Boys Overall champion, who joined Small and St. Onge on the medal podium in the bronze position with a trick run of 11,900 points.

The finals for mens jump were held under the lights in front of a raucous evening crowd. The Queen would have been proud as Small won jump with a 26.9 meter jump followed closely by St. Onge and young Tom Heaps, the competitor from Great Britain who set the junior world jump record earlier in the week.

For all the scores and more go to BarefootWorlds.org